If you would like flexibility with your energy storage then an LG Chem RESU Lithium-ion could be the perfect solution for you.

LG’s unique line-up of sizes, capacities, and formats means you can create the optimal system that meets your needs. These batteries can be either floor or wall-mounted making it much easier to comply with Australian BESS Standard AS5139.

Instead of sending your excess solar energy to the grid, store it to use at night and to power your home in case of a blackout. 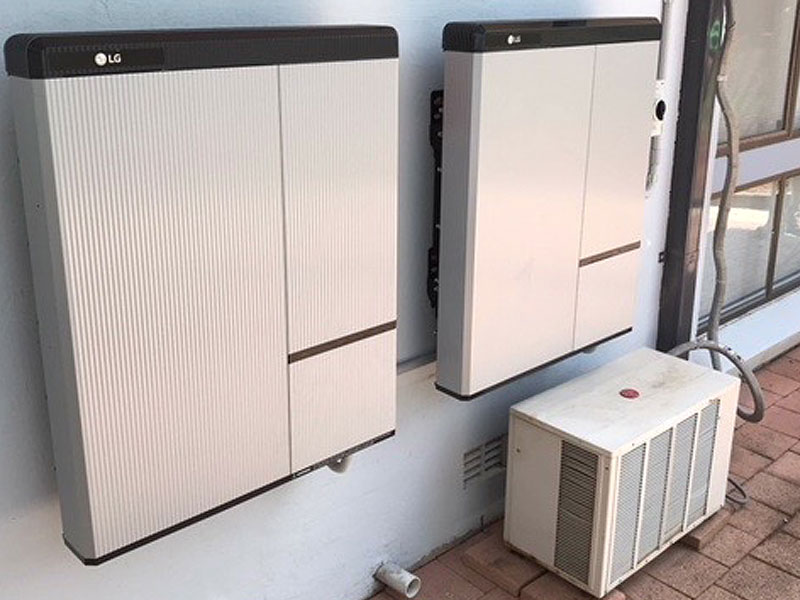 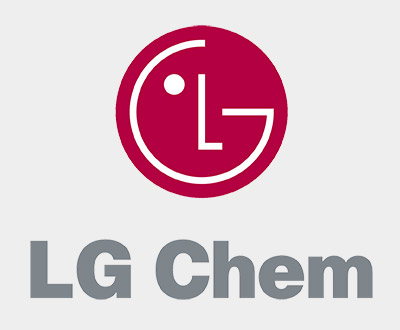 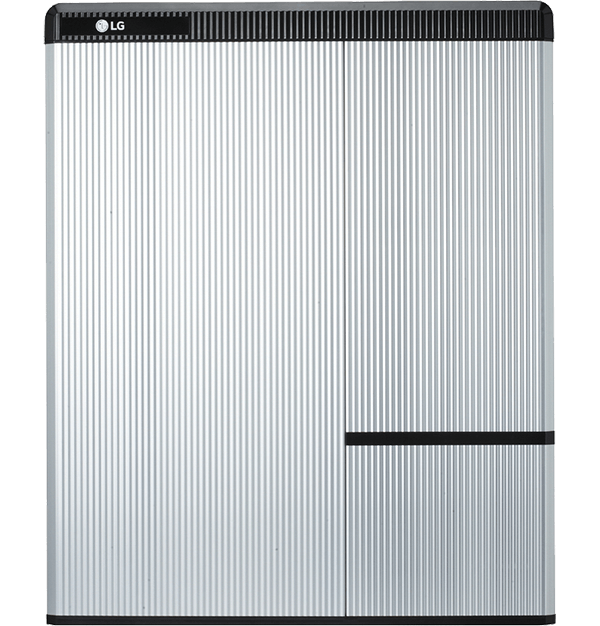 Battery management at your fingertips

Just like the Tesla Powerwall 2, the LG Chem RESU batteries comes with its own app, meaning you can track performance and output in real-time, making adjustments on the fly depending on how much energy you need.

You can use the app to control how much energy you send back to the grid, and what you use for your home. 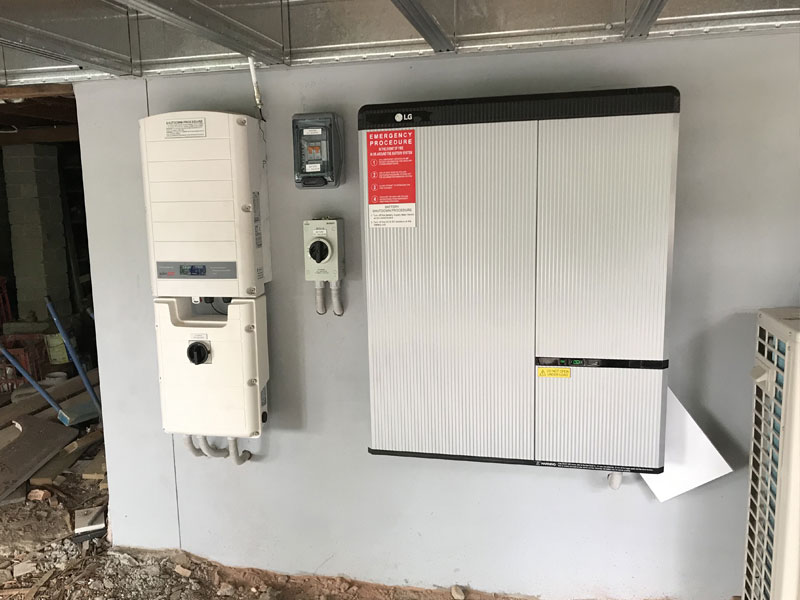 The ultimate in flexibility.

Not only do LG power hybrid and electric vehicles and homes, but their battery technology also meets the stringent standards required to reliably power NASA spacesuits. 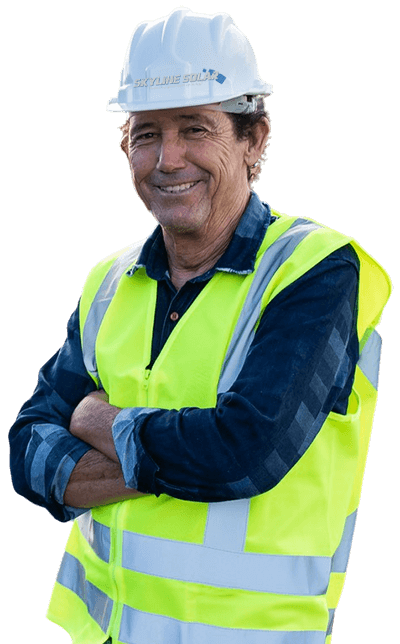 LG Chem Ltd is a South Korean multinational conglomerate corporation. It produces batteries, energy storage systems, and cosmetic products. The company has its headquarters in the Seocho-gu district of Seoul, South Korea. LG Chem was founded as GoldStar Co. Ltd. in 1947 by chemical engineer Cheil Jedang. In 1952, it entered the electronics industry with the launch of the world’s first transistor radio. In 1958, it produced South Korea’s first TV. In 1973, the company manufactured South Korea’s first home refrigerator. It produced South Korea’s first colour TV in 1975 and the world’s first LCD television in 1978. In 1995, GoldStar merged with Lucky Chemical & Energy (LG Chem), and adopted its current name LG Chem Ltd. Its main automotive battery subsidiary is LG Chemical.

LG Chem has been working on and developing energy storage solutions for the grid, houses, and UPS since 2010. LG began developing lithium-ion battery technology in 1995, thus the current range has 20 years of R&D behind it. LG Chem has production facilities in Poland, Korea, China, and the United States. This gives LG Chem a wide global presence. LG Chem has established itself as one of the most successful energy storage solution providers in the business. LG Chem was recognized for the first time in 2019, when it became the first Korean firm to join the ranks of the world’s top ten chemical corporations.

How much does a LG Chem Battery cost?

Before incentives and installation, the RESU6.5 costs about $5,300 and the RESU13 costs around $8,800. We currently stock the RESU10H and please contact us for our best price.

Battery-only pricing, on the other hand, can be deceptive—in fact, it will always be greater. End prices are determined by location, installation fees, and other factors that contribute to your optimum experience, including the proportion of solar area and battery size.

Our professional and Clean Energy Council certified installers will assess your specific situation before providing you with a tailored quote, ensuring you don’t pay for anything you don’t need.

Can I add an LG Chem Battery to my existing solar system?

The LG Chem RESU range is approved for rebates on each of the various state solar schemes. This means that if you are installing solar panels, you may be able to get a rebate for the cost of the battery. Contact Skyline Solar for more information, we can provide information on rebates for solar panels and other solar battery system options.

Are LG Chem Batteries any good?

Do you want a top-quality battery storage system that is reliable and long-lasting? Look no further than the LG Chem RESU series. With over 20 years of experience in the industry, LG Chem is a trusted name when it comes to batteries. Whether you need a battery for your home or your business, LG Chem has you covered. Plus, their batteries are compatible with a variety of inverters, so you can choose the perfect one for your needs.

The LG Chem RESU range are all Lithium-ion batteries. LG Chem’s “Lamination and Stacking” technique is used to manufacture the cells of each of their battery storage system range. By reducing the dead space, this design improves cell longevity and energy density. The LG Chem 18650HG1’s cell structure has been given a protective barrier to safeguard against short-circuiting, overheating, and structural failure. The “Safety Reinforced Separator,” as it is called, improves the battery’s mechanical and thermal stability. The LG Chem range has a battery management system on each model, which ensures that the battery is totally independent.

The LG Chem Resu home energy storage system is backed by a 10-year warranty, as with most high-quality energy storage systems these days. While a manufacturer guarantee is only valid if the firm is still in business, Australian Consumer Law comes into play, and the prospects of LG failing are fairly low. They’ve been operating for a long time with no indication that it will stop any time soon.

After the date of the initial installation, or after a minimum energy throughput has been reached that varies according to model, whichever comes first, LG warrants that its batteries will retain at least 60% of storage capacity for 10 years.

If you want to buy a solar battery system, LG Chem RESU battery systems are worth considering if they have a good track record in battery manufacturing and are still in operation today.

How long does a LG Chem battery last?

The LG Chem RESU 10H PRIME lithium battery has a lifespan of more than 20 years with an average of 250 cycles per year.

How does a LG Chem battery work?

One or more LG Chem RESU batteries are linked directly to your solar inverter for charging and operate on direct current (DC) power generated by your solar panels. The batteries have a capacity of 9.6 to 16 kilowatt-hours (kWh), depending on the size you pick.

Can you install a LG Chem battery outside?

Yes, the LG Chem RESU battery pack has been tested and certified to IP55, allowing it to be installed indoors as well as outside. However, if the battery pack is exposed to direct sunshine or water, do not allow it to remain in contact with either for an extended period of time, doing so may cause:

The LG Chem RESU warranty has specific operating requirements that restrict the battery’s operating temperature and energy throughput throughout its life. In places like regional Australian cities and remote regions, this may be an issue. In order to protect the battery from high temperature, it must be placed in a cool place. Many areas of Western Sydney and the Hawkesbury have an afternoon peak temperature of 45°C, and careful planning is required when placing the battery. Inside a garage or a well-insulated, ventilated, or well-vented area with an ambient temperature of no more than 45°C can help prolong the life of the battery.

To help maximise battery life, the LG RESU batteries feature built-in temperature and voltage sensors. The LG battery management system de-rates the output by half once the internal cell temperature reaches 50°C, and reduces it to zero when the temperature rises above 55°C in order to avoid degradation or thermal runaway.

General Motors and LG Chem announced in April 2021 intentions to establish a second battery cell factory in the United States, valued at $2.3 billion, in Spring Hill, Tennessee that will produce cells for the 30 electric vehicles expected to be produced by mid-decade.

The plant, which is located adjacent to GM’s existing Spring Hill factory, will begin operations immediately, according to the company’s CEO and Chairman Mary Barra. The battery factory is projected to be finished by late 2023 and create 1,300 jobs.

The two battery factories, when completed, will produce 70 gigawatt hours each, making it roughly twice the size of Tesla’s Gigafactory in Nevada. The 35 GW-hour Tesla factory in Nevada is part of a collaboration with Panasonic.

Who supplies the LG Chem with lithium?

Sociedad Química and Minera de Chile (SQM) supplies lithium products to LG Energy Solution, the recently independent battery division of LG Chem. The contract with SQM was originally signed in 2021 and will continue until 2029. Between 2021 and 2029, LG Energy Solutions will receive lithium hydroxide and lithium carbonate from SQM. According to the terms of the agreement, LG Energy Solutions is obligated to purchase approximately 55,000 metric tons of LCE equivalent (LCEE).

What inverters are compatible with LG home batteries?

The LG RESU battery works with a variety of inverters. All RESU installations, like all other solar installations, require the use of a suitable inverter. Using an inverter that is not authorised by LG Energy Solution will render the warranty void. A SolarEdge inverter such as the SE3000H, SE5000H, SE6000H, SE8250H and SE10000H are all supported as is the SBS5.0 from SMA. You can see the full list of compatible inverters here.

LG uses a unique Polymer ‘pouch’ flat laminated battery design (PH3) in contrast to many other solar batteries manufacturers, that utilise cylindrical battery cell technology. LG Electronics claims that this design allows for much higher energy density while maintaining greater reliability and safety. Placing the battery cell pieces on top of one another instead than rolling or bending the cell structure reduces the danger of failure and allows for more uniform heat dissipation.

The LG solar batteries have been subjected to the UL1973 test procedure, which ensures that there will be no explosion or indication of fire when the battery cells are pushed into a thermal runaway state. 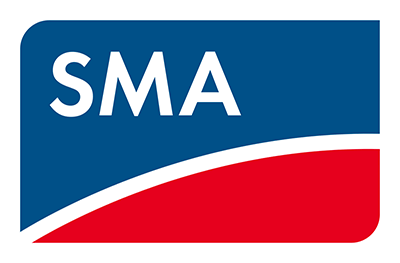 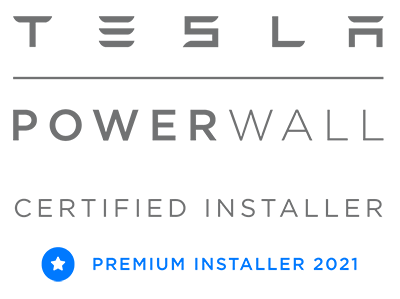